Beer of the Week

Not to be outdone by Michael's whisky-centric soliloquy (and accompanying naff puns) each week, every Wednesday Colin shall be penning his thoughts on his beer of the week, with the inaugural beer being chosen in honour of Rabbie Burns night, with the beer bottle featuring an image of the rather fertile Scottish poet and Exciseman (Burns fathered no fewer than thirteen children with five women!) 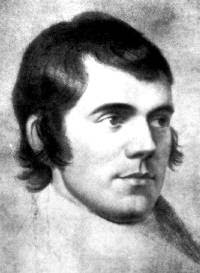 Broughtons Exciseman 80\-
As Scottish beer and whisky was so popular and readily available in Scotland, frequently from the near convenience of a shed or outhouse, the ruling classes determined that it was a fine way to bolster their coffers and so began the ignominy of the Exciseman. This character would travel the high and lowlands with a complicated suitcase of measures to determine the gravity and alcohol content of the local beery produce. The neat classifications 60(Scottish light), 70 (Scottish Heavy) and 80 (Scottish Export) shillings were were an indicator both of the strength of the beer and also the levy due on its production. Breweries outside of Scotland have adopted the term 90 Shilling to donote the Strong Scotch Ale or Wee Heavy, but it is unlikely that Rabbie Burns would approve! 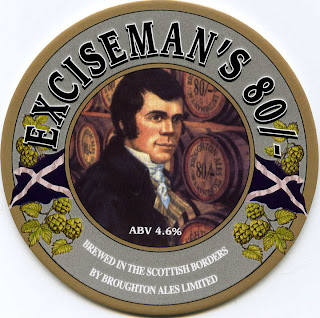 Broughtons Exciseman 80 Shilling is a malty reflection of its style, showing a vibrant ruby colour to the light. On the nose it is a golden treacle and blackcurrant affair, which carries through to the body of the beer when sampled. Its initial sharp sweetness develops into a floral hopped middle and full mouthfeel that leaves a slight peppery finish on the tongue. This is an ideal beer to wash the offaly good flavour of haggis down!
Both Exciseman 80/- and Haggis are available for a limited season at L. Mulligan. Grocer.
ABV: 4.6%
Volume: 500mL bottle
Price: €5.50

This Saturday from 3-5pm Colin will host a tutored tasting of Scottish beers. €25 a head includes 8 beers, finger food (including Scotch eggs!) and a limited number of puns.