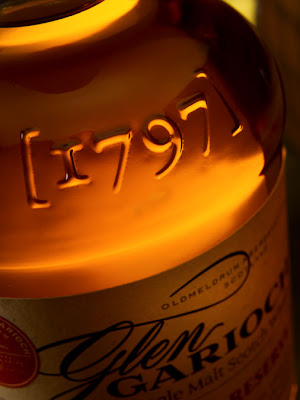 The Glen Garioch distillery has been on the go since 1797 and is one of Scotland's oldest distilleries. Like most Scottish distilleries it had its ups and downs and funny moments. While visiting several years ago I learned a funy story about one of the previous owners:


William Sanderson was one of the most prominent  whisky barrons in the 1880’s. At that time he launched VAT 69. Yawn! Here comes the blarney: Yep, he selected the 69th barrel from 100. As a result, Glen Garioch became the major malt in this blend. Not so today, Glen Garioch is soley used in single malt bottlings. Sanderson then went on to produce several other blends , SVG (Specially Vatted Glen Garioch) OBG (Old Best Glen Garioch) and my favourites A.M. & P.M. , which were for drinking before and after lunch!
The distillery was sold to Morrison Bowmore in the 1960s and has stayed under their control since (albeit, they in turn have been taken over by Japanese giants Suntory). Suntory with a bit of Scottish vision, temporary closed the distillery in 1995, to make sure of its long term survival. The distillery got a bit of a makeover and reopened in 1997, the results of the re-vamped distillery are clearly evident in the Glen Garioch Founder Reserve.
Rich and malty with lashings of toffee, dried prunes and hints of charcoal.


Enjoy at only €5 a measure, but the first person who comes to the bar this Friday and Saturday who can pronounce it correctly, I will give them a free dram.
Michael.