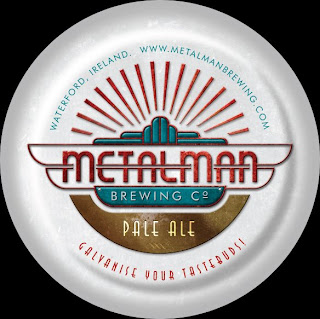 A recent and noted addition to our stable of Irish beers, after selling out in the space of a week, Metal Man Pale Ale has been back on draught for just over 48 hours. The reaction has been very positive.

I first spoke to Grainne and Tim of Metal Man brewing company some time ago about beer, breweries, excise, VAT, margins, sales and all the things that go into starting to think about a business plan for a micro-brewery in Ireland. We would frequently meet up at Irish Craft Brewer (now Beoir) beer tastings, where budding brewers would share their wares with other budding brewers, and discuss. It was a very thinly veiled excuse to drinks lots of types of beers to be honest, but also a wonderful breeding ground for a recent surge of newly opened micro-breweries. Cormac from Dungarvan Brewing Company, Thom from Trouble Brewing and now Grainne and Tim from Metal Man Brewing are all members and co-experimenters of the Irish Craft Brewer website.
It has taken some time, a lot of work and remarkable conviction that has finally brought Metal Man Brewing to our establishment. To illustrate, Grainne quit her job. In these times of economic frowning and recession giving up a perfectly sound job, with a decent wage, benefits and holidays, to create a business from scratch, in an industry that you haven’t worked in before, where competition is friendly but prevalent sounds like madness, but I for one am delighted that they have done it. It is encouraging!
The Tuesday morning the beer arrived was a flurry of Metal Man action. The beer arrived, the lines were chased, the font was erected, the keg was tapped and the beer was flowing all before the stroke of midday, which made my very first taste of Metal Man Pale Ale all that much more exciting. The ale poured a golden, straw-like colour, with a clear white head, containing the results of Grainne and Tim’s hard work. It had a wonderful lychee, kiwi and grapefruit nose, with hints of white pepper, orange peel and lemon rind. The initial flavour in your mouth is a sweetness, which develops into a bittered dryness that puckers your pallet. That bitterness that ensues reminds me of an American Pale Ale in that it has a fresh vibrancy about it, but has plenty of biting back bone to bring you back down to earth. I wasn’t too sure what to make of it after the first taste, so I went back in for another try, and then another. As I tried the beer time and over, I noticed that I was meeting each sip with as much curiosity, enjoyment and interest as the last. It is a very moreish drink! The body isn’t over carbonated which lends itself to easy drinking. The beer itself is a bit different to what is available on the Irish market at the moment. It is more bittered, more lightly malted and more gently carbonated than our current offerings, which will likely gain it quiet a following, especially coming into Summer.
More than the excitement we all feel at seeing a new Irish Micro Brewery spring up, I am delighted for Grainne and Tim. They started out on a lonely and difficult path, armed themselves with information, advice, necks of brass and took the leap that most of us fantasise and lament over. It is a road less travelled but I feel they will see the reward of their endeavours. I am certain that when the summer hand hits twelve o’clock we will all be chiming along to the sound of Metal Man Pale Ale.