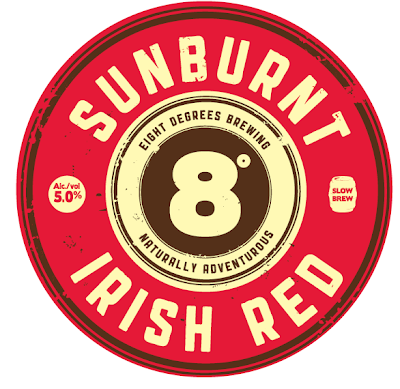 Stand any of the Mulligers in sunlight for longer than a few minutes and we scorch. No cute freckling or golden tans round here (with the exception of Aurelien our swarthy French barman). It was with great glee then that we welcomed a new beer on draught this week that shares our aversion to ultra-violet radiation.

Beneath the russet exterior of this Irish Red beats an Antipodean heart. The brewers Cam and Scott (an Aussie and a Kiwi respectively) began their brewing education as homebrewers before training at the Versuchs und Lehranstalt fur Braurei Institute in Berlin. They purchased the old Carlow Brewing Company kit and installed it in their shiny new brewhouse in Mitchellstown.

Spicy aromas give way to a malty, rich ale which is a little less sparkling than I had expected. There is some grapefruit bitterness, with a pronounced hop 'kick'. The flavour develops more as the beer heats up slightly. In fact the lads themselves cite this as the afflatus of the brand name, 8 degrees being the perfect temperature to appreciate the full flavour profile (you can read the other reasons on their site). Loads of traditional Irish red flavours: malty, biscuity etc but with pithy dry finish, this would be a great one for pairing with cheese or roasted meats. 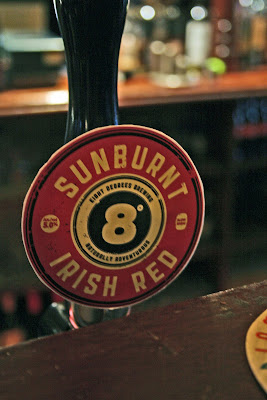 Now pouring as part of the visiting collection at L. Mulligan. Grocer. €4.90 a pint.